On 5-7 March 2019, Euromed Justice gathered the members of  the High Judicial Councils and Supreme Courts of the Southern Partner Countries (SPC) on the occasion of a study visit to the Court of Justice of the European Union (CJEU) in Luxembourg and to the European Court of Human Rights (ECtHR) in Strasbourg. The study visit was followed by an interactive seminar. 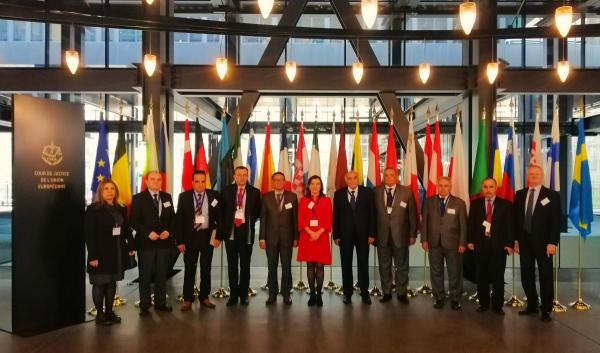 A well-functioning, independent judicial system, the respect for democratic institutions and fundamental rights protection are indispensable factors for democracy and security in the SPCs. Indeed, the previous EuroMed Justice Phases have shown that, in several partner countries, one of the institutional factors that is not clearly resolved is the distribution of judicial and executive powers among the various institutional players and authorities regarding the strengthening of the rule of law, judicial independence, democracy, and fundamental rights.

Against this background, the study visits aimed to provide the participants with a better understanding of the functioning and proceedings of the two European Courts - the ECtHR and the CJEU – and of the European standards on judicial independence, self-governance, and accountability. In particular, the key objective of the study visits was to update the SPC representatives on the evolution at European level of the rule of law, the independence of the judiciary, and the protection of fundamental rights.

The members of the High Judicial Councils and Supreme Courts were able to see at work the models, the methods, and the procedures used by both European courts to implement these principles. At the CJEU, in Luxembourg, they attended the hearing at the Grand Chamber of case C-482/17 (action for annulment of a directive on weapons), for which they were previously briefed by Mr. K Ziegler, Legal Secretary at the CJEU. This hearing was followed by an interactive session with the CJEU staff, which included a presentation by CJEU President Koen Lenaerts, on judicial protection in the EU followed by an exchange of views between him and the SPC delegations. At the ECtHR, in Strasbourg, the participants had the opportunity to exchange with the staff working at the Court, including Mr. Paulo Pinto de Albuquerque, Judge elected in respect of Portugal. In the interactive seminar, the former Iurisconsult of the ECtHR, Mr. Vincent Berger, Professor Ionel Olteanu as well as representatives of the Council of Europe (Venice Commission, Pierre Garrone, and HELP programme, Eva Pastrana) were the key speakers. These study visits therefore led to fruitful exchanges and were valued as extremely positive by the SPC representatives.