EuroMed Justice CrimEx experts' interactive session with the Court of Justice of the EU (Luxembourg, 19 June 2018) 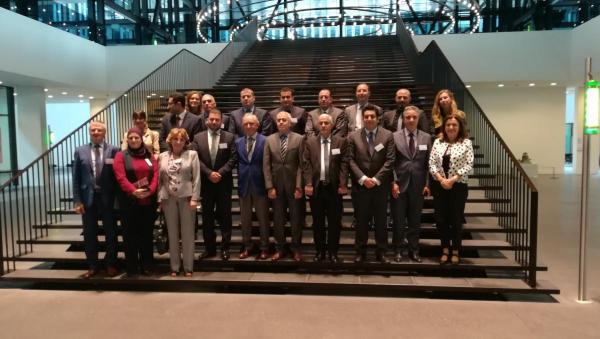 On the 19th of June, the members of the CrimEx group from eight South Partners Countries (Algeria, Egypt, Jordan, Israel, Lebanon, Morocco, Palestine, and Tunisia) had a one-day interactive session at the Court of Justice of the European Union, in Luxembourg.

The purpose of the session was to identify the possible training topics related to the enforcement of EU law and the EU Charter of Fundamental Rights, as well as to understand the complexity and the effects of the EU proceedings and judicial decisions throughout the EU.

On this occasion, the CrimEx members attended a hearing of the Court of Justice’s Grand Chamber on a preliminary ruling requested by a French court on whether halal meat could be labelled as organic in accordance with the EU legislation on organic food and on the protection of animals at the time of killing. The hearing therefore touched upon different issues such as freedom of religion, animal welfare, and consumer protection.

The CrimEx members had the special opportunity to discuss face to face with the Head of Chambers, the French Advocate General, a registrar and a legal secretary (référendaire). They were introduced to the EU judicial architecture, the organisation of the CJEU, its procedures, the dialogue between national courts and the Court of Justice of the EU, and the Court case law.

The CrimEx group will meet over a period of two years (2017 and 2018) and functions as a regional forum devoted to Euro-Mediterranean cooperation on criminal justice. The next session will take place in November 2018.