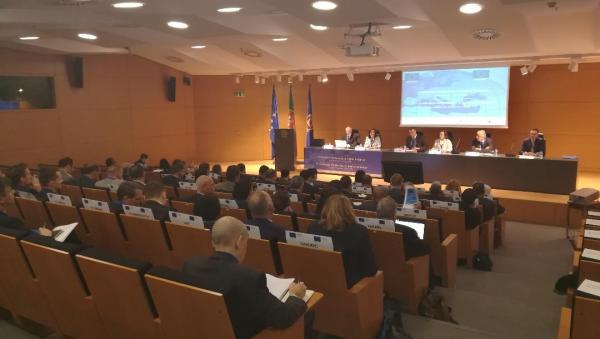 For the first time ever, judicial and law enforcement representatives from the EuroMed area met with Communication and Internet Service Providers to discuss the access to digital evidence at the Joint EuroMed Justice and Police Conference on Digital Evidence (Lisbon, 23-25 April 2018).

As criminals often use electronic devices to commit crimes, it has become clear that criminal investigations must increasingly rely on electronic – and generally cross-jurisdictional – evidence. However, criminals are usually one step ahead of the legislation, so that law enforcement and judicial authorities from South Partner Countries experience difficulties in accessing such digital evidence. The main objective of the EuroMed Conference on Digital Evidence was therefore to provide the judicial and law enforcement authorities with the tools to secure and obtain electronic evidence quickly and effectively, especially from US-based Service Providers (SP). This important event – jointly organised by EuroMed Justice and EuroMed Police – is part of a discussion taking place at international, regional, and national level on the access to e-evidence.

During the Conference, the representatives from the major international and regional stakeholders addressed various issues relating to access to digital evidence from a legal, procedural, and technical points of view. The Conference was also the occasion to present the existing initiatives and experiences within the different international and regional agencies and networks, as well as to exchange best practices, especially with regard to networks of contact points specialized in cybercrime and/or digital evidence.

Furthermore, the EuroMed Justice and Police experts presented the methodology and main findings of the draft EuroMed Manual on Digital Evidence. In particular, the SPCs clarified certain points relating to their domestic legislation and practice, asked questions, and described the challenges faced in the fight against cybercrime and access to digital evidence. All these elements allowed the experts to complete the draft Manual.

The participants welcomed the thorough discussions and noted the added value of the Manual as a useful tool for successful cross-border investigations and prosecutions.

The Conference is the result of joint efforts of the EuroMed Justice and EuroMed Police with the support of UNCTED, UNODC and IAP. Eurojust, EJN, Eurojust-Cybercrime Team, the European Judicial Cybercrime Network and Europol were closely involved in the Conference. The Portuguese judicial and law enforcement authorities gave full support to the Conference.

The Euromed Police IV Project is funded by the European Union and implemented by a consortium led by CIVI.POL Conseil. Its overall objective is to increase the citizen security across the Euro-Mediterranean area through the strengthening of cooperation on security issues between the Southern Mediterranean partner countries, as well as between these countries and the Member States of the European Union.

For any further information on EuroMed Police, please contact the Project Management Team at: https://www.euromed-police.eu/contact/.